The part of physical theater classes that made me most skeptical was mask work. Masks freak me the heck out. But after working with a neutral mask in Paola’s workshops, I think I better understand how they’re useful tools. 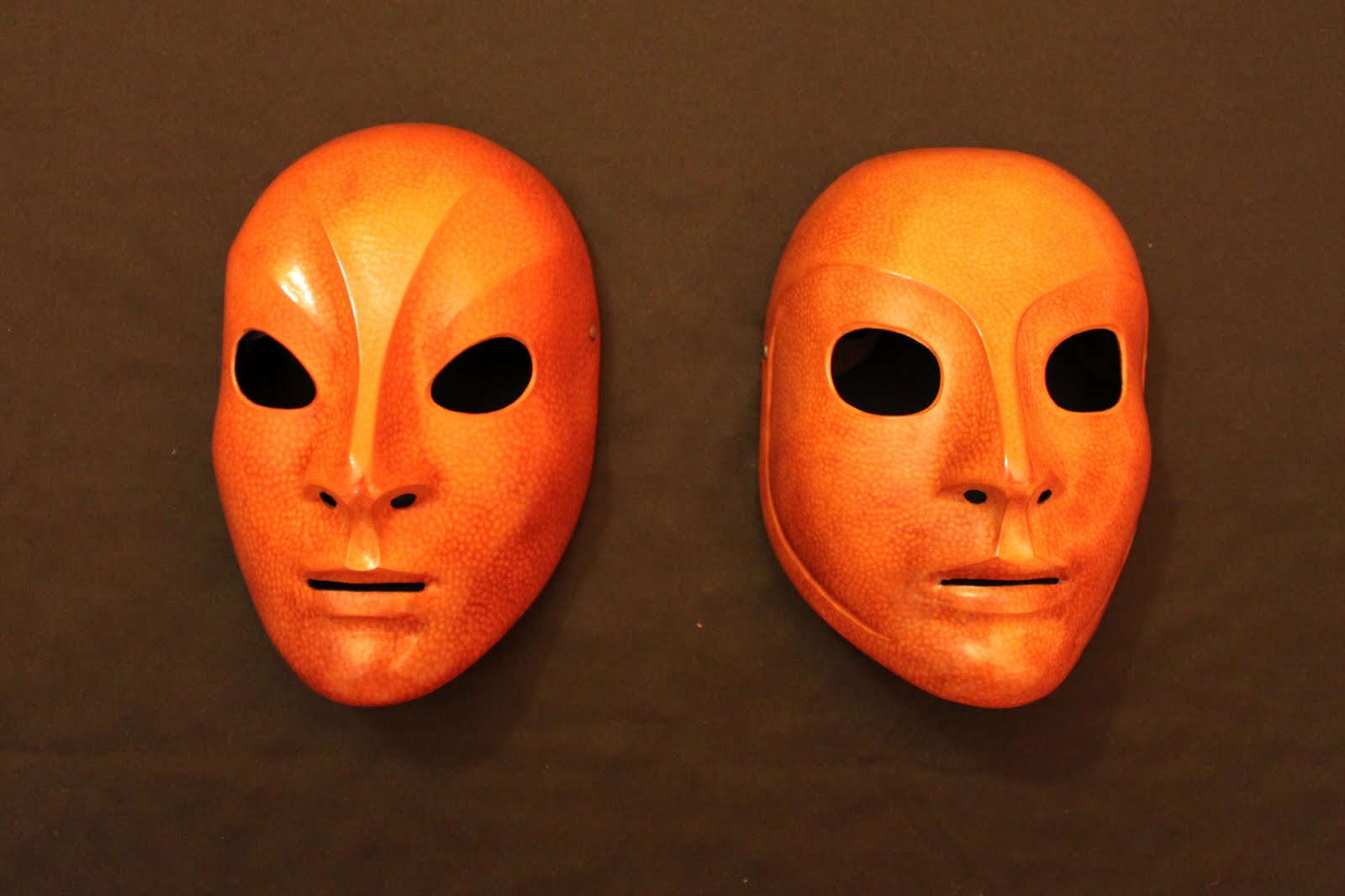 One is supposed to be male and the other female, but I never can tell which is which. My hunch is that the female is on the right.

When you put on a neutral mask, you can’t tell a story with your facial expression. All the communication has to be in the rest of your body. The mask leaves no room for timid or halfhearted playing. You have to fully commit.

After class one week, Paola asked me what sort of performances I was working on these days. I told her I was doing a little improv in the suburbs, but mostly I was preparing for Easter Vigil at my church. She asked for more details.

I told her that we tell several stories from the Old Testament, and we have to stick to the text exactly, but we have freedom to move, dance, and sing.

She asked, “And this is for how many people?” It’s a big auditorium; we’re expecting around 2,000 people.

“This is perfect! You bring all the mask work with you. You cannot use your face; only a couple people are close to see your face. All you have is movement. This is how you serve the text, whether you speak it or not. In front of 2,000 people, you already wear a mask!”

You won’t see me wearing a (scary, right?) neutral mask in the readings, but you can bet I’ll be pretending to wear one, especially during Israel’s Deliverance at the Red Sea.

If you’ve done big group trust falls at camp or in an improv workshop, the goal was probably team bonding. I’ve used a version of trust falls I call Falling by Numbers to keep an improv troupe in a state of heightened awareness. Maybe they also bond or whatever, but that’s not something I can control, so I’ve given up trying.

At the beginning of practice, the coach assigns a number to each player. Throughout practice, the coach calls out numbers one at a time, and whoever has that number yells, “Falling!” and falls. Right away. Even if it’s in the middle of a Party Quirks or a Harold. The rest of the troupe catches the faller and lifts her back up. Then the scene or game continues as though nothing had happened.

I’m less interested in developing trust in the faller and more interested in cultivating trustworthiness in the catchers. I want players to grow eyes on the sides of their heads so that they can be ready to run in any direction, at any time, to whomever needs them most in the moment. I want them playing with their whole bodies, not just their faces and voices. You can’t catch someone just by saying, “I’ve got you!” You have to move. I want to see that alertness spill over into how players behave on the sidelines. (Y’all, I have some opinions about sidelines.)

Let’s take for granted that you are playing with the kind of people who would never, ever drop you on purpose. If that’s not true, it’s time to get out of that nightmare troupe* and look for your dream troupe.

A trustworthy troupe will catch you no matter where you fall, but you can help them out by falling well. Keep your eyes open, call “Falling!” loud and clear, and fall toward the center of the room where your teammates have the best chance of catching you.

Basically, the opposite of this:

This comes to mind for me now when I feel old hints of old depression or anxiety symptoms flare up. I might not have any control over whether or not I’m falling, but I can call it out and fall toward my friends instead of away from them. Maybe they’ll catch me, maybe not, but they definitely won’t if I don’t make it clear that I need trustworthy people to be ready just in case.

*Third Wheel is the only troupe I’ve ever been in that has dropped someone. It was at our very first show, it was a result of not paying attention or sharing focus well, and it was traumatizing.

A paraphrase of something one of my physical theater teachers said today, as best as I can remember it:

Your body trusts your brain completely. This is why, if you’re in bed at night and you start thinking about something scary, your heart beats faster. Even if that scary thing is only a lie in your brain, not a fact in the real world. Your body can’t tell the difference between truth and lies.

This is why, as Paola and physical therapists and even my pastor’s wife have all told me, your history is written on your body. Your body remembers your physical injuries, yes, but it also remembers your hurt feelings and disappointments and anger and grief.

In this fabulous TED talk that you should watch in its entirety,* Harvard professor Amy Cuddy shares her research on the effect of “power posing” not only on how people are perceived but also on their testosterone and cortisol levels. (Basically, standing like Wonder Woman for two minutes at a time chemically raises your confidence and lowers your stress.) She argues that when you “fake it till you make it” you actually fake it till you become it.

It’s not about the content of the speech. It’s about the presence that they’re bringing to the speech. … They bring their ideas, but as themselves, with no residue over them.

The goal of the class is not therapy. Paola has made it clear that she has no interest in how we’re doing emotionally in the outside world. But to be a strong performer, you must have confidence and presence. Our goal is to work out the places in our bodies that hold tension; it’s a constant fight to stay alive in neutral, to get rid of that distracting residue Cuddy talks about.

*Watching this video has my husband “power posing” at random in our apartment. It is the best.

I am neurotic about sideline etiquette. When I see an improv team for the first time, I find myself enjoying them more or less based on how the players are holding themselves when they’re not in the scene.

Maybe it’s because I spent high school on a Destination Imagination improv team. I picked up some unhelpful habits from DI, which I had to break when I started learning short form and long form. (For instance, in DI, it was very important to be correct to the letter. In ol’ regular improv, it’s more important to be supportive.)

Our DI coaches and advisers made sure we knew that we were being judged any time a judge was in the room, not just during our 6 minute performance. Judges watched our performance, but they also took notes before and after, from the moment we walked in the door and took an oath of secrecy* to the moment we shut the door on our way out.

Then the judges quantified their impressions of us by giving us points for teamwork, presentation, fluency, resourcefulness, and ability to follow instructions. (And, of course, on our ability to build a structure out of mailing labels and Popsicle sticks that could support added weight and float in a tub while we wrote and sang a jingle advertising a fictional country.) If we got more points than everyone else, we moved on in the competition. If not, we were cut, and DI improv was devastatingly over for the year.

How does this apply to grown-up improv?

Just because you’re not in the scene doesn’t mean you’re invisible. The audience sees you the whole time. They’re not giving you points and making pie charts and deciding whether or not you’re allowed to continue improvising, but they are deciding whether they’re going to come to your next show.

If you are attentive and alert, your body and face show that you care about the scene. That adds energy and makes the scene better. If you’re picking at your fingernails and resting on the back wall, you communicate that you’re bored. That sucks energy out of the scene and makes it less fun for everybody.

So if I’m standing up straight and looking alive on the sidelines, it’s probably because I know you’re judging me. I’m doing it for looks. But my brain doesn’t seem to know the difference between pretending to be interested and genuinely being engaged, so I use my posture to trick it.

And since I don’t have to waste valuable seconds shifting my weight from the back wall to the floor, my timing is better; I can be onstage the moment I realize a scene needs me to enter or edit, not a beat after that moment.

Also, on a practical note, unless you’re in a venue with a savvy light tech, there is no literal spotlight. If you’re on the sidelines, you are the spotlights. Your eyes and posture show the audience where to look and how to feel.

*Any good extracurricular involves an oath of secrecy.